They’re at it again, the sketchers. Nearly a thousand of them from all over the world, attending the Urban Sketching Symposium in Porto. Dozens parked on staircases, in cafés and on street corners. Faces bobbing at irregular intervals, examining a scene, making a mark or two, looking up again, looking down and making a mark or two, then looking up, then looking down and making another mark.

Repeat, for two hours or more.

At night, the same thing but indoors. Only now, beside the sketchbook sits a glass of beer, getting warm and flat. Then, till all hours of the morning, earnest discussion about vanishing points and pigments.

Urban Sketchers was founded in Seattle in 2008 by Gabby Campanario, and it has since grown into a huge global movement. Gabby works at the Seattle Times, and has taken up running in the last few years. He ran a marathon in Seattle in June, and we compared notes. Which side of the Douro is better to run on: that sort of thing.

I don’t know why I’m surprised, but Porto’s graphic culture is at a very high level. And it’s not just the domesticated design of packages, posters, signs and t-shirts. It’s also the wild design on walls, doors and discarded appliances.

(Speaking of packages, tinned sardines come dressed up in splendid little boxes. As in Barcelona, these people are connoisseurs of tinned food and will pay ridiculous money for a can. Entire shops are dedicated to conserved mouthfuls of fish, octopus, squid and other delicacies. Hundreds of handsome packages stacked in gorgeous crayon colours. We ordered a can of sardines the other night, and the open can arrived on a plate, together with the lovely cardboard box respectfully laid alongside, indicating its provenance.)

But I get so easily distracted. What I started to say is that the most exciting graphics are on walls, doors and discarded appliances: ingenious and masterful graffiti animate the twisting streets and lanes of Porto. 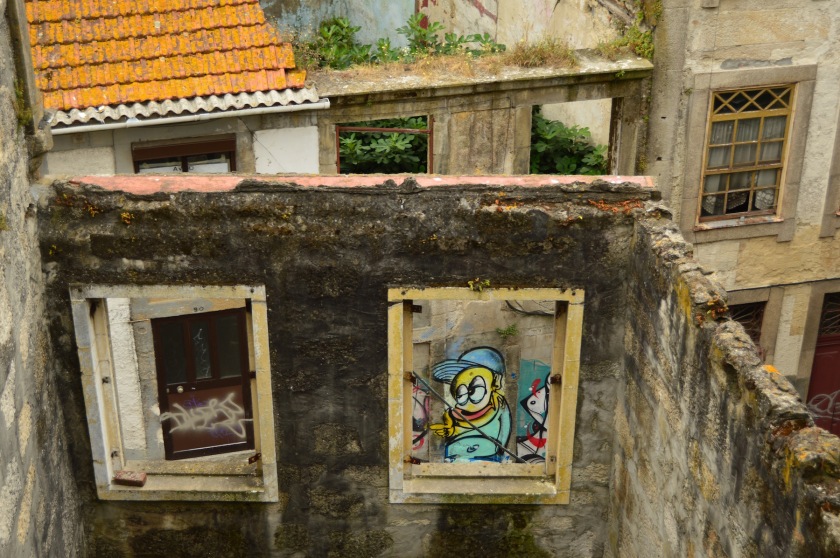 Life lessons on a t-shirt

A different kind of graphic culture, near-universal in its reach, plays out on t-shirts. How and when, exactly, did t-shirts happen? When did it become permissible to walk around wearing garments that declare, WORLD’S GREATEST GRAMPA?

You see less of this here than in North America. But even here, you get life lessons and comments whether you like them or not: COOL PEOPLE SMILE.

Or, THE ONLY THING WORSE THAN BEING BLIND, IS HAVING SIGHT AND NO VISION.

A woman with a toddler in each hand: I LIVE FOR LUST.

A scowling woman in a tight sleeveless:

I went to high school when t-shirts were worn under collared shirts for added warmth in winter, or during gym class. You’d wear a t-shirt during summer to play in the park. But then, during high school, they started to become possible at school. The poorer kids, especially from Pointe-St-Charles, St-Henri and Park Ex might wear a t-shirt to school, usually plain or a solid colour. No logos, no clever words, no graphics.

Imagine the bombshell, then, when a boy named Frank Freck came to school in a white t-shirt, with an all-caps, all-black FUCK OFF across his chest.

“Where did you get that?” I asked, incredulous. But what I really wanted to ask was, how could you?

It was as if he’d set his hair on fire, farted loudly during the minute of silence on Remembrance Day, and lit a bong in the principal’s office. All three at once. I couldn’t help but admire him.

And, to be honest, his FUCK OFF was the first life lesson I’ve ever absorbed from a t-shirt. It taught me that I will never possess Frank Freck’s magnificent nerve.

All you can drink

I was having an espresso at a downscale little café yesterday, where a posted sign listed the nine grades of port wine available by the glass. Prices started at €3.5 and climbed to €14. The nine wines: Tawny, Ruby, Branco Sweet, Branco Dry, Pink, Reserva, LBV, 10 anos, 20 anos. You can order all nine for €44, or smaller portions of all nine for €30.

You can, but why would you?