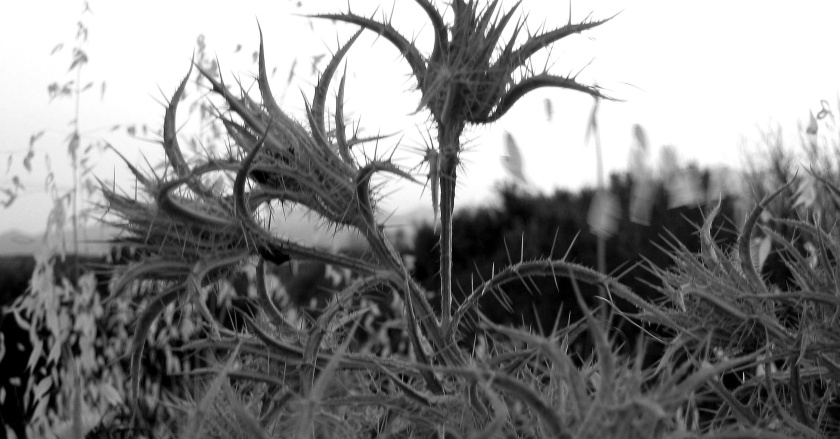 I didn’t post a short story last month but I’m doing so now. It’s called “Taygetos,” and it’s named for a mountain range, and its tallest peak, in the Peloponnese. The area is among the most rugged in Greece, and among the poorest — a harsh place with its own tragic history and beauty. Look under the Stories heading on my blog, or you can get there directly by clicking on “Taygetos.” I hope you enjoy reading it. 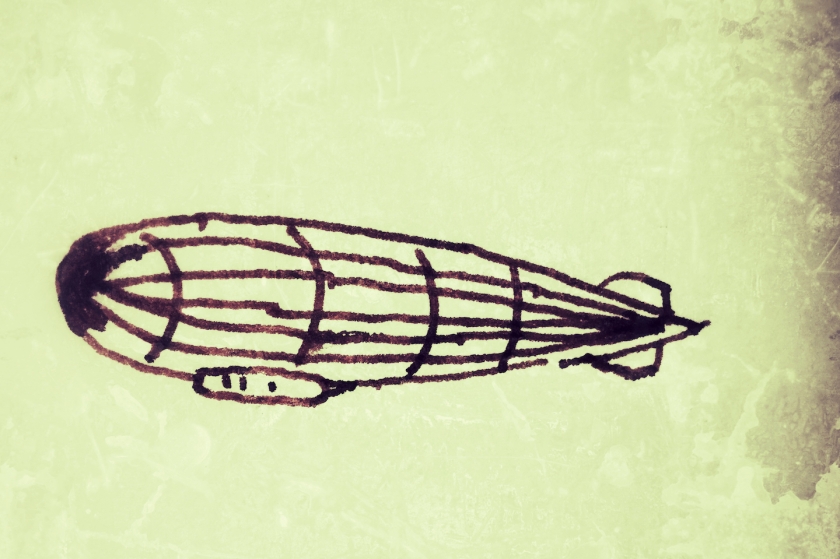 I dropped in on an elderly aunt in Park Extension, who greeted me with kisses and tears and immediately began bustling in the kitchen, her walker clanking against the stove and getting snagged on table legs as she manoeuvred within the narrow space to make Greek coffee.

She’s well into her nineties, so I offered to take over, but she wouldn’t hear of it. The rules of Greek hospitality are never to be trifled with.

Before finally collapsing into a chair, my aunt dug into her cupboard for a small plastic bag of homemade trahana, a slightly sour, crumbly pasta made with milk or yogurt. Someone had visited the village and had brought back a supply, and this was the last of it, about a cup. She instructed me to make trahana with chicken and stewed tomatoes. I knew better than to protest.

I put the bag on the table so I wouldn’t forget it and saluted her health, taking a long, appreciative slurp of coffee.

At Canadian customs, Greeks tell outrageous lies about the contents of their luggage.

Meanwhile, their suitcases clatter with half a dozen bottles of Metaxa brandy, ouzo, tsipouro or mastiha, the last flavoured with the sap of an evergreen that grows on the Island of Chios. More than once, during pre-9/11 days, I’d seen a favourite shotgun, disassembled and lovingly wrapped in cotton batting, resting among the herbs.

For generations, suitcases and tin trunks bulged with needlepoints and tablecloths, rugs, wedding clothes, icons and even pots and pans. But also cotton sacks filled with trahana and chilopites (another kind of pasta). Hard pastelli, made with sesame seeds and honey, bags of dried beans, twists of paper containing tomato seeds, tins heavy with honey. Also, bunches of dried oregano and bags of thyme, chamomile and mountain tea, whose aromas impregnated everything and made clothes unusable for months.

You can buy trahana and chilopites at Greek grocery stores. You can also get pretty good olive oil. The olives, though, never quite measure up to the 25-litre tins families ship to Canada by sea. I stopped receiving those precious tins of olive oil and olives long ago, and this I regret.

One summer, my parents slipped a couple of bottles of Canadian Club into my suitcase, as gifts to my uncle and aunt, with whom I’d be staying in Greece.

I gradually fell in with a group of guys about my age, that summer, and one of the bottles somehow came into our possession on a hot and airless July afternoon. I remember we were in Mitso’s front yard, and the bougainvillea was brilliant against the whitewashed wall. A grey cat dozed in the shade, beside a tub of sweet basil.

There were about six of us, and we took refuge in Mitso’s bedroom, closing the wooden shutters against the heat and light. Someone put on music and we began passing the Canadian Club, taking slugs and growing more relaxed. By the bottle’s third circuit, we were already lurching around the room and performing a kind of dance, sweat pouring from our bodies. Led Zeppelin’s “Kashmir” was playing.

In the middle of all this, Mitso turned to me and asked, “So what are these guys singing about, anyway?”

Everyone stopped and turned to me, expectantly. I liked Robert Plant and Jimmy Page well enough, with John Bonham thundering behind, but the words were hardly the point. What could be more insipid than “Stairway to Heaven”?

But here I was, drunk, attempting a simultaneous translation of “Kashmir.”

Oh, let the sun beat down upon my face
And stars fill my dream
I’m a traveler of both time and space
To be where I have been…

I had to make most of it up.

Then it was on to the Doors. “Light My Fire” was easy enough…sort of, if you’ve had enough to drink. But what about “Rider on the Storm”?

And so it went, all afternoon, getting drunker by the minute and force-marching my addled brain through a dense thicket of rock lyrics.

We finished the bottle and staggered from the house, blinded by the light. The shadow behind the bougainvillea had shifted and the cat was gone.

Still drunk, we climbed on motorcycles and motorbikes, me clinging for dear life behind Mitso, and roared off to the beach. Orange groves whipped by, the fresh blacktop decorated with mysterious green splatters that, when we slowed for the curves, turned into lizard road kill.

By the time we arrived we had cooled off and jumping into the water seemed like too much work. So we sat on plastic chairs under a bamboo shelter and stared at the blue water, our toes curling in the sand. We ordered fried potatoes and beer.

Greek hospitality, the impulse to share food and drink, is baked in. A villager gave a bag of trahana to someone from Canada, who shared it with my aunt, or with someone else who gave it to my aunt — I have no way of knowing, ultimately, how many hands the trahana passed through before it wound up in a small plastic bag, next to my coffee, in a cramped kitchen in Park Ex.

I suppose I could have divided my cup of trahana into thimblefuls and shared it with my own family circle. But just as the supply eventually dribbles away to nothing, so too do the old ways weaken and die. Another thing to regret. 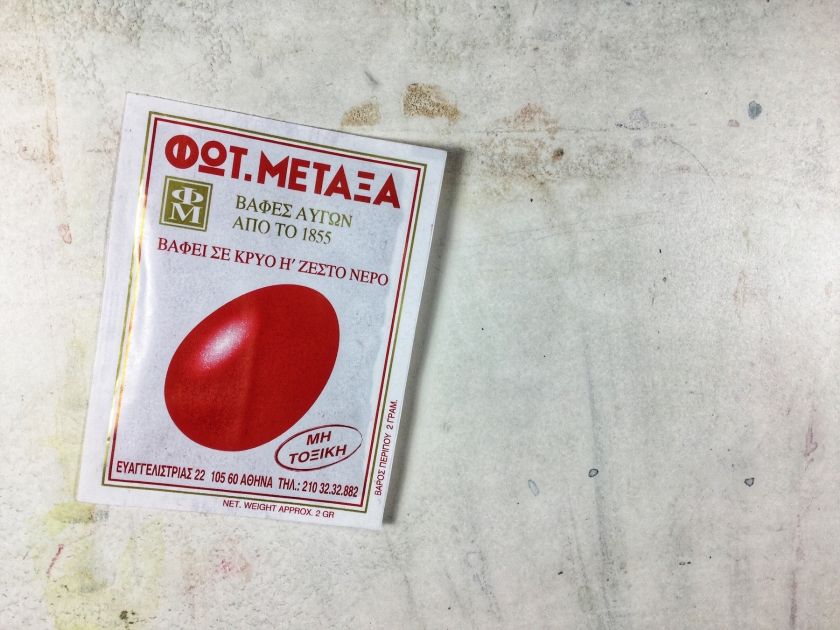 This week I’ll be dyeing my eggs red, planning Sunday’s big dinner and shopping for lamb. The question occupying my mind is this: given the quantity of food I’ll be preparing, do we also need a pastitsio, with its heavy béchamel sauce and pasta?

I guess I already know the answer to that.

For weeks, I had been following the she-goat’s pregnancy with interest, as its round belly grew to resemble pieces of luggage. A lumpy day bag, at first, then a sack of odds and ends, and finally a duffel that nearly scraped the stony ground.

A cold February day with low clouds threatening rain, as I hurried home from school.

My aunt saw me from the kitchen window and came out to meet me. “She’s giving birth,” my aunt whispered. “Go have a look.”

To keep the she-goat warm, my aunt had put her in the greenhouse — a rickety structure of wood and plastic sheeting where they protected the tomato seedlings from frost.

And there she was as I entered, literally spilling her guts. The kid, really just a folded parcel of hair and bones soaked in blood, was trembling with electric speed. Its mother gazed at me with the goaty yellow eyes of ancient wisdom and plain stupidity.

I immediately had to leave, as you would leave a scene of violence. But after I caught my breath in the house, I returned twenty minutes later and the kid was already standing on rickety legs and taking its first step. It felt like a resurrection.

Some weeks on, several more kids, from other she-goats, were skipping around the yard and getting in my aunt’s way.

I never figured out how they did it, but at midday I’d often find the kids high up in the olive trees at the back of my aunt’s house. How they managed to climb the trees is beyond me. But there they’d be, perched in the tall branches and bleating joyfully at the sky, as their mothers watched and chewed, far below.

My uncle drove a grocery store delivery van, and I’d join him on busy days, humping boxes up steep staircases throughout Park Ex. Gallon tins of olive oil, haunches of meat and wedges of cheese balanced on one shoulder, in preparation for Easter.

He was in a foul mood. The weather — “that whore!” — probably had something to do with it. Overnight, it had turned Canada-cold again and dumped more snow on the ground, threatening the weekend festivities. He loved the good life and hated to work, like a few Greeks. But above all, he hated being told what to do and when to do it, like most of his countrymen.

Our windows were rolled up against the weather, but he was doggedly working his way through a pack of king-size Rothmans. Every time he finished another one, he flicked the butt into the slushy floorboards. He’d been doing this for days and the floor was now littered with butts.

I’d heard the boss, fed up with the state of his van, tell my uncle to stop doing this.

“Why don’t you use the ashtray?” I asked, between deliveries. “You heard the boss.”

“Why? Because I like hearing the ‘tssss’ when my cigarette hits the snow. That’s why.”

Greek Orthodox Easter, rich in ancient rites and mysteries, is the most important holiday on the calendar, and it lasts for days.

Days of clanging church bells, tinkling censers, clouds of aromatic smoke, golden vestments and ranks of candles. Days of the psalti chanting the old, halfway familiar words, and serene-looking saints on every side, jealous for your kiss. Days of the close-packed smell and heat of humanity, rising and sitting as one. The flowers, the praying, the sorrow, the people spilling out onto the street because the church cannot hold them. Then, the midnight announcement — he is risen — and the candles passed from congregant to congregant, and the trembling flame that needs shelter until it’s brought home and held high to mark a sooty cross above the threshold.

I no longer follow these rites, nor do I attend church. I have Netflix.

But even though I am fallen and far from the church, I still stubbornly dye my eggs, roast my lamb and bake my koulourakia, although I’m not sure why.

I think about that kid I saw tumbling out of its mother, barely alive, a flickering flame gaining strength by the minute. I think about my uncle and his stubborn refusal to bend to another’s will, and about my own mulish Greek ways. I think, too, about life’s boundless love and cruelty, of grief and a kind of resurrection.

All these things are mysteries enough to ponder during Easter, as I sprinkle sesame seeds on my koulourakia before sliding them into the oven.

As you’ve guessed by now, one of the kids perched in the olive tree in back of my aunt’s house became our Easter Sunday meal, all those years ago. We cracked eggs, said Christos Anesti, and ate and ate until we were bursting.