The waters at Fontaine de Vaucluse gush from the rocky cliffs and well up from untold depths below, settle into wide streams and swift-flowing channels, and are eventually collected, tamed and regulated to constitute the Sorgue, which flows south, divides at L’Isle-sur-la-Sorgue and divides again several times more before reaching the Ouvèze, the Rhone, and eventually the Mediterranean.

But the Sorgue has a mysterious source, not entirely understood. For while the waters surge with enormous pressure in spring and fall, following the rains and snow melt, the unexplained flow continues even during the driest summer months.

Thousands of visitors climb the village’s gentle slope, alongside beckoning ice cream and tourist shops. The road and the town abruptly end at the cliff, and here, within a deep grotto is a seemingly shallow pool. This is where the river begins.

Many of these pilgrims are Italian, uncharacteristically morose-seeming. They seek answers at the river’s source. The national sport of shouting is barbed with a drop of bitterness these days. Where you might expect to find them in cafes and restaurants equipped with giant screens tuned to the World Cup, all you see are brawny and sunburned Brits and Germans (alas, the Germans!).

But you do see the Italians at mid-day, in the blistering sun, trudging along what must seem like the Via Dolorosa, to La Source. Afterwards, back in their hotel rooms and B&Bs, windows shuttered, mumbling and groaning into their knuckles.

The biggest spring in France

But to return. The spring is indeed a gusher — the biggest in France and, according to some sources, fifth biggest in the world. But now we’re getting into ridiculous territory. Who’s the fifth-best James Bond? And which is the fifth-best breakfast cereal? Since we’re not hydrologists, let’s just agree that it’s one of the top springs in the world.

Attempts to measure the depths have been taken. First, divers descended but never found bottom. Jacques Cousteau got involved. Then they sent a robotically controlled submarine contraption to a depth of 300 metres. Still no bottom. I hope they leave it at that and don’t continue to torment this beautiful place with facts.

At dinner the other night, over trout amandine, we watched a man positively bristling with expensive fishing paraphernalia sloshing through the waters below the restaurant and casting his fly in every direction, craftily targeting placid pools, then shadowed areas beneath the trees, then deeper regions where the fish seek cooler waters.

The fish were having none of it. They were no doubt sneering at his equipment.

The waters are in fact teeming with trout and grayling and dozens of other species, and you see plenty of men and boys fishing off footbridges and from the water. It’s a catch-and-release area, though, so the trout you see on so many menus are caught somewhere downstream by less expert-seeming fishermen.

For the record, the fish was delicious.

I got up early this morning for my long run along the aqueduct, and headed north, against the slow current. It was early and there was no one else on the path, but the path and canal are generally deserted at most hours anyway, except for the butterflies and ducks, and the occasional scurrying lizard.

As I rounded a corner, I finally discovered how deep the canal is. A woman was thrashing waist-deep in the water, as a man, possibly her husband, tried to help her out. They must have been at it for quite a while because they both looked exhausted and a little panicked. Meanwhile a small black-and-white dog was nervously jumping about and barking, and the exasperated woman kept telling it to shut up.

I immediately offered to help, and together the man and I grabbed the woman by her forearms and managed to heave her out of the water. Apparently she had fallen in while trying to rescue her little dog, which I now noticed was still wet. They thanked me. In its excitement, the dog was turning cartwheels.

As I turned my Garmin back on and continued my run, I felt for the first time like a godsend. 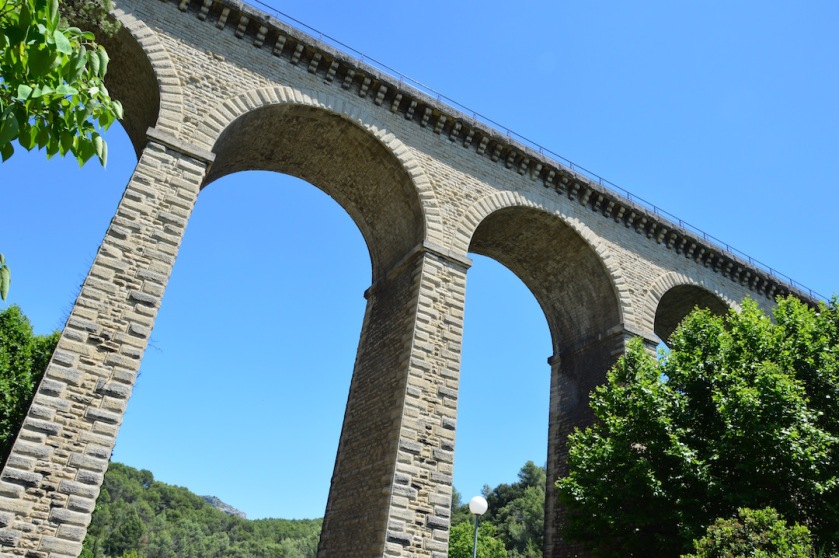 We fall asleep and wake up to the sound of rushing water.

We’re installed in a former mill, now the Hôtel du Poète, in the ancient village of Fontaine de Vaucluse. Water gushes everywhere, braids into a hundred channels, leaps over stones and dashes along walls and buildings, disappearing beneath and then bursting out again on the other side. Massive water wheels, which once powered the mills, are now decorative but still turn, covered with inches of dripping moss. Ancient millstones lean against buildings, and everywhere giant plane and fig trees, iridescent damselflies and trout hovering sleepily in the watery turbulence.

And yet, blind to all this, driving here from Avignon, wedged into the middle seat of our transport van, I anxiously scoured the roadside looking for the shoulder where I was expecting to run. There are no shoulders. Just rocks and dry, waist-high shrubs pushed up against the asphalt, trucks and cars hurtling by, and no place for a poor runner to go.

I wonder how much trouble it will be to transport my body home. Easier and cheaper for all concerned if they just bury me here. Cremation has always seemed the more sensible and environmentally correct option, but on the other hand, the local cemetery must be quite picturesque. Friends could combine a nice holiday in the South of France with a visit to my grave. Maybe shed a tear or tear or two, voice a few regrets (I never told him how much I loved and respected him. And now it’s too late…), raise a glass to my memory.

But if I’m serious about interring my bones here, I should at least tell someone of my intentions. I should write it on a Pastis coaster and leave it where it can be easily found. Then I thought of other objections. Such as the fact that I’ve been baptized Greek Orthodox and the local clergy, increasingly jealous and territorial, might…

“How far eet eez you want to run, monsieur,” inquired the man at the desk.

It was a couple of hours later and I was kitted out for running. I told him.

“Ah,” he said, pondering. He instructed me to return the way I had arrived. In about one kilometre, I will see an aqueduct. Look for a path on the right, and run along the water. No cars. “Bon chance!”

It took a couple of tries to find the path. I passed a kayak rental place swarming with school kids in life vests, then labouring, unhappy-looking cyclists in spandex, then carloads of Italians shouting at each other.

As I turned a corner, there it was. Monstrously large, clambering down on giant stone legs from the mountains and striding across this narrow valley to descend on the other side and water the grapevines and figs. In my white-knuckle anxiety about where to run, I had missed it when the van passed right beneath.

It took a couple of tries but I finally found the path and climbed to the top. A grey-green channel flowed silently from the foothills, almost funereal in its progress, compared to the mad watery scramble below.

In a moment, I was running along a cool tunnel of vegetation, dotted with wild poppies and daisies. Further along were olive and fig trees, clumps of bamboo and oleander. Mother ducks and ducklings slipped into the water ahead of me, alarmed by the clomping human. At this point, when I thought it was all too much, somewhere close by a donkey began to bray and I had to laugh at my luck.

“Probably a Roman aqueduct,” I said later on at dinner, over roast duck. After all, we’d just visited some very extensive Roman ruins in Lyon, which is 250 kilometres north of here, via the TGV. It stands to reason that the Romans would have begun their pillaging and rebuilding here first.

But then I looked it up and this aqueduct is as French as brie.

It was built in the mid-nineteenth century to bring irrigation water from the Canal de Carpentras, which begins in the foothills of the Alps, to the Comtat plain, before emptying into the Ouvèze River.

So far, I’ve run three times along the aqueduct: a let’s-see-what-this-is-like run, a tempo run, and intervals.

Which reminds me, I have no idea how deep the aqueduct is and I know for a fact that Spyro is capable of drowning in a saucer of water. I should check on a map to see where it actually leads, and the possibility that my waterlogged body could wind up wedged beneath a grapevine. Not a bad way to go, all things considered.

I wrote a short story a while back about a father and his son, and titled it Cape Cod. Vacations, which allow for some escape from ordinary routine, sometimes create the conditions for extraordinary events.

I hope you like the story. You can link to it from the title above, or go directly to the “Stories” menu on my blog and binge on all of them.