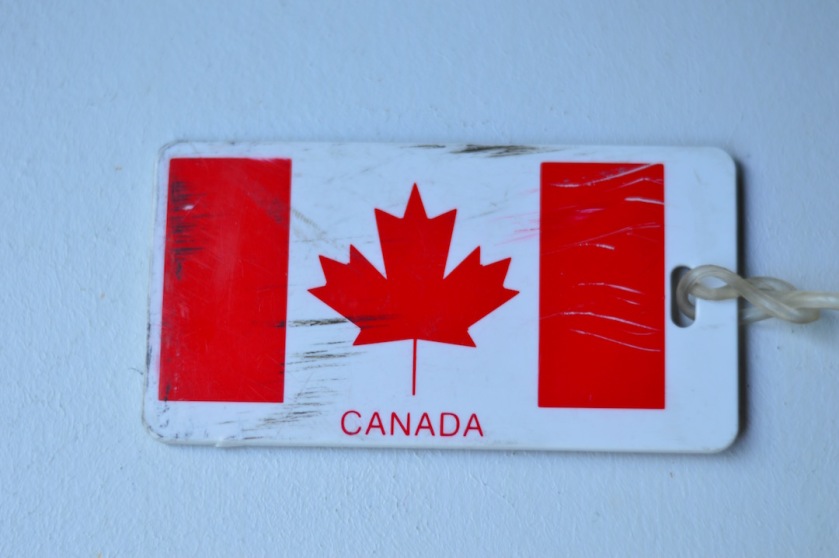 July 1, 1966. At Piggery Park, the boy wearing glasses watches the older boys play baseball. They make it look easy, winding up and throwing in slow motion. The white blur, slap of the catching glove.

Afterwards, walking home, he drags a stick along the yard fences to make a machine gun.

Dollar in his pocket, money his parents gave him in the morning just in case. His mother kissed him before leaving for work, when he was still in bed.

At his corner, an older girl stops him and hands him a sheet of paper from a stack she’s carrying. She doesn’t give him a chance to read it, she’s talking so fast. She says all the kids are invited to be part of the Canada Day parade. She says Canada is a beautiful country made up of beautiful people from all over the world. She says to wear clothes that tell where you come from so everyone will know. All this, she says, is explained in the paper.

“Yes,” he says, looking at the paper. He’s never been in a parade.

When he gets home he uses his key to open the door. His family lives upstairs, on the third floor. He turns on the TV and looks again at the paper the older girl gave him, thinking about what he might wear in the parade. He goes through the three closets in the apartment but can’t find anything right for a parade.

All the time, Johnny Jellybean is on the TV and he’s very funny.

The boy goes back to his own closet and looks at his suit, which always makes him feel good when it’s on. He wears it every Sunday morning, with a white shirt and a clip-on bow tie, to go to the big church on Sherbrooke Street with his mother. The church has the highest ceiling the boy has every seen, with a great glittering chandelier hanging from a chain. Clouds of incense fill the air. The sound of men singing like goats. In the ceiling there is a dome, and in the middle of the dome a big eye, blue, looking down. It is God’s eye.

Some of the other boys at church laugh behind their hands because he’s wearing a suit instead of a sweater, like they wear. They think he doesn’t see them but he does. Ever since he got his glasses, he can see everything.

He never says much in class because at recess one day, two of the girls said he speaks like he just got off the boat. When it’s time for the kids to take turns reading a page or two aloud from that week’s book, the teacher never calls on him. She’s given up trying. They think he can’t read. Just off the boat.

The boy goes for extra help in reading on Tuesday afternoons. Miss Butler is very nice and he reads to her. She has red nails and smells of soap. She wears a skirt and the boy always waits for the moment when she crosses her legs.

Sometimes when his parents are at work, the boy puts on his suit, his shirt and his bow tie, and looks at himself in the mirror. He wets a comb under the bathroom tap and combs his hair.

He does that today, Canada Day, and then has an idea.

He opens the drawers in his mother’s sewing machine and finds what he needs: a spool of red ribbon, needle and thread, a pincushion bristling with pins, and scissors. He takes off his jacket, measures a length of red ribbon around his sleeve and snips the ribbon. It takes a long time to thread the needle with red thread. When he’s done, he begins to sew the ribbon around his sleeve. It’s hard pushing the needle through the thick cloth, and when he’s finished one of his fingers is bleeding. The two ends of the ribbon don’t meet, either.

The boy wraps a Kleenex around his bleeding finger and with the tips of the scissors snips the threads along the ribbon. He tries again, this time just pinning the ribbon, without sewing. He’s seen his mother do this. The ribbon is perfect now, and you can hardly see the pins. He pins on a second ribbon a little higher on the sleeve, and then a third. After that, he pins three ribbons to his other sleeve.

In the mirror, he looks fine. Dashing. That’s a word he learned recently, reading with Miss Butler.

All this has taken him a long time, so he checks the paper. Four o’clock. They’re supposed to meet at the corner of St. Roch and Stuart Streets at four o’clock, in the basement of St. Cuthbert’s Church.

He spends another half hour or so pinning red ribbon along the sides of his pants. Then he snips pieces of red ribbon, along with pieces from other ribbons in different colours, and pins them to his breast pocket.

Puts on the suit and stands in front of the mirror. “Aye-aye,” he says, saluting.

Wishes he had a hat, but doesn’t. But he finds plastic binoculars among his old toys and hangs these around his neck.

In the basement of St. Cuthbert’s church, the older girl with the papers is running around, getting things ready for the parade. The boy counts fifteen other kids, wearing costumes from different countries. Some of the girls have long dresses and are wearing makeup, lipstick even. One boy is dressed as a tsolia, with the white skirt and red shoes. He must be Greek too. Another boy is wearing a sash with two toy pistols. The older girl asks each boy and girl what country they’re from, and writes the name of the country on a piece of white cardboard that she attaches to a stick. They’re supposed to carry this in the parade, like a sign.

When it’s the boy’s turn, he doesn’t know what to say.

“Well, what are you supposed to be?” says the older girl.

“Arizona,” he says. He doesn’t know where Arizona is, but he likes the sound of it. He’s captain of Arizona.

“But what country?” she says. “I can hear that you have an accent, so you must come from another country. Which one?”

Looks at her through his binoculars and says nothing.

“Oh, never mind,” she says. She writes Arizona on his sign and hands it to him.

Outside, on the street, the parade is about to begin. What kind of parade is this anyway? There is hardly anyone lined up to see them and hardly any kids. One boy has a drum and a girl has an accordion. She is surprisingly good on the accordion. Her fingers are flying.

They march, and the boy sees his reflection in a store window, the red ribbons on his sleeves and pants marking him out. Dashing. At the corner of St. Roch and Champagneur, the boy has had enough and steps out of the parade. No one stops him.

Still has the dollar, so he climbs the four steps into the snack bar and sits at a stool. An old woman buying something asks him, in Greek, who he is.

“Bless you,” she says, and crosses herself.

With the dollar from his parents, he orders two hot dogs, a fry and a Coke.

The counterman puts the plate in front of him and asks what all the commotion is outside.