Below is the first real photo I snapped with my new Brownie, about a year and a half ago. A random moment on St. Viateur Street, in Montreal’s Mile End neighbourhood. Slanting shadows, a chill in the air, someone honking at someone else to get a move on. I’m standing outside Café Olimpico, on my way to meet two friends at Arahova, a popular souvlaki joint just up the street. Arahova is a chain, but the St. Viateur outpost is where it all began, and so we call it the Mother Ship, as a way to signal a homecoming of sorts.

A white dog looks to the right, the agitated figure of a woman looks left. Two creatures connected by stark shadows and not much else, seemingly oblivious of each other’s presence. And yet they’re intimately connected by a collar, a leash, a tiger-print dress, by thousands of years of history. But I like the tiger dress best of all.

For some reason a day doesn’t go by when I don’t think of this photo. For no precise reason, the image haunts me. Maybe because I continue to find it so puzzling — and more so today, when we’re reminded of the narrow gap between human and non-human. When we’re learning new words, such as zoonotic disease and wet market. And when we’re tracing global events to crowded market stalls in Wuhan, China, and pointing fingers.

Some months ago, I read The Friend, by Sigrid Nunez. It’s a novel about a woman who winds up living with and caring for a mysterious, aging dog. I liked the book — ruminative, discursive, sad, with hardly a plot to speak of. The movement of the narrator’s mind is a foraging creature, browsing the past for interesting tidbits about writing, love, death and the animals we live with. (To be fair, I’ll say that some friends who also read this book were far less impressed than I was.)

One passage struck me, though, and I stopped to write it down, certain that I would return to it later. And now I have. It’s about the idyllic state in which animals live.

…Idyllic because animals were not expelled with us from Paradise. There they remain, untroubled by such complications as the separation of body and soul, and it’s through our love and friendship with them that we are able to reconnect to Paradise, albeit by just a thread.

Animals remain untroubled, too, by so much other clutter. By dire news of today’s disaster, or tomorrow’s implications. Animals inhabit a pure innocence, unburdened by time and consciousness — or at least time and consciousness as we understand it. I’m reminded of how people describe their aged parents’ dementia: as an eternal present.

Exercising an uneasy truce with my Achilles tendon, I went running in South Carolina’s Low Country. This was only two weeks ago, when we were visiting a vast gated community, where many of the residents own horses.

I was running down a road flanked by live oaks, when a white horse spotted me from across a fenced-in field and came at me at a thundering gallop. The horse stopped at the fence, neighing and tossing its head, and stamping its hooves at me. A city boy, I have no notion of the inner life of horses. So I couldn’t tell if the horse was happy to see me, or pissed at my presumption, or eager to play, or amused at my clump-clumping progress. (You call that running?) He took another long look at me, all twitching muscle and snorting head, and trotted back to where he came from. I called after him, but he’d already forgotten me, returned to his idyllic now. 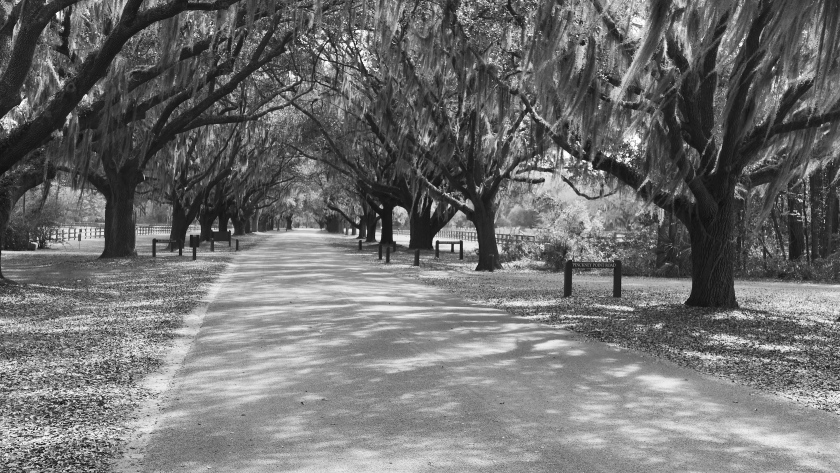 We’re back at home now, the four of us, including Alice the dog. With more humans in the house 24/7, and more attention and snacks, Alice seems happier. But if things were to change back to how they were before, that would be fine with Alice too.

On the first Sunday back, I went for another run. It was a beautiful sunny day, people bundled against the cold, eyeing each other warily, carrying on conversations from opposite sides of the street. I headed for the local cemetery and managed to eke out a few kilometres among the tombstones in the melting snow.

Over the past couple of years, we’ve observed the first Chinese families moving into our neighbourhood. They’re recent immigrants. Most have young kids, and sometimes elderly parents also live with them, and you often see these grandparents pushing a stroller or walking hand in hand with a toddler. Last Sunday, returning from the cemetery, I made it a point to smile and wave at these newly-arrived families. They greeted me with smiles and, maybe I’m imagining this, a measure of surprised relief.