They break into smiles when they see an old friend at the gate, someone they haven’t seen in years, with whom they picked peaches in the Okanagan Valley, grapes in Niagara. They shake hands, trade stories.

But after a time, waiting to board, most of them fall asleep. Stern-seeming once again, stretched out in their chairs, dreaming perhaps of home.

On the plane, our seatmate seems happy to speak English. He has worked in Canada for eight years, mostly in British Columbia and Alberta, but more recently in Quebec greenhouses, growing and harvesting broccoli.

He used to be away for five months, but now the contract is for eight and he misses his wife and four children — the oldest is twelve. When I go home, he says, I will take my family on a small vacation.

The instant we land in Mexico City, they all pull out their phones…

In a drawer in my office, there’s a U.S. Green Card dating from the early years of my parents’ arrival in Canada, when my father traveled from Montreal to Chicago’s large Greek community to work.

A long-distance phone call to the Chicago cousins: Small talk about each other’s health, number of children, news from Greece, the recent death of a favourite uncle, “May God forgive him.”

Then, after a pause: “Would there be work there, in Chicago? Any kind of work? Because, well, right now in Montreal…”

Then the train from Montreal’s Central Station. The months away in a cramped apartment, with children bawling and soup simmering on the stove and fogged up windows and long hours in restaurants, washing dishes, scraping pots, mopping floors.

Back in Montreal, my mother would have been working in a factory on St. Lawrence Boulevard, doing piecework on women’s blouses. But she also has two pre-schoolers on her hands, who stay with a widowed aunt, catching roaches in an apartment in the Plateau.

My father never returned to Chicago. Presumably he soon got back on his feet, because he and his two brothers-in-law opened a grocery store on St. Lawrence Boulevard, near Pine Avenue. They named the store Bravo, and it was a success. But two years later they made an ill-advised decision to also open a bakery in the basement of their store, and that folded under a heavy load of debt.

I was living in Greece at the time, with my uncle’s family and my grandmother, so I never saw the catastrophe unfold. But I remember my grandmother reading aloud from a pale-blue airmail letter. The letter tells of the recent misfortune: the loss of the business, the move to Park Ex, my father working for wages again. He now works on a trocki.

My grandmother pauses, turns to me. Trocki, what could that be?

A φορτηγό (fortigó), I translate. My father is working on a truck.

Later, when my father owned a small grocery store once again, this time in Park Extension, I’d often join him to buy produce at Montreal’s Central Market.

By then, the United Farm Workers of America were leading a boycott against the nation’s powerful grape growers. Conditions for the mostly Mexican-American and Filipino workers were abysmal: long hours for little money, toxic chemicals, back-breaking work, racism, bestial living conditions…

But eventually the growers had to concede that the boycott, led by the soft-spoken Cesar Chavez, was working. The union won a raise of ten cents an hour, bringing wages up to $1.75, plus a twenty-five-cent bonus for each box picked.

Eventually boxes of grapes began to appear at Central Market bearing an Aztec eagle — the union symbol. A man of the left, my father positioned the boxes on the store shelves so that the eagle was prominently displayed.

Bargaining always went badly at negotiations with the unions, especially at the outset. The big U.S. growers, accustomed to thinking about Mexican Americans as farm animals — when they bothered to think about them at all — could hardly get their heads around the fact that, across from them at the negotiating table, sat a row of short, dark, powerful men with stern faces. 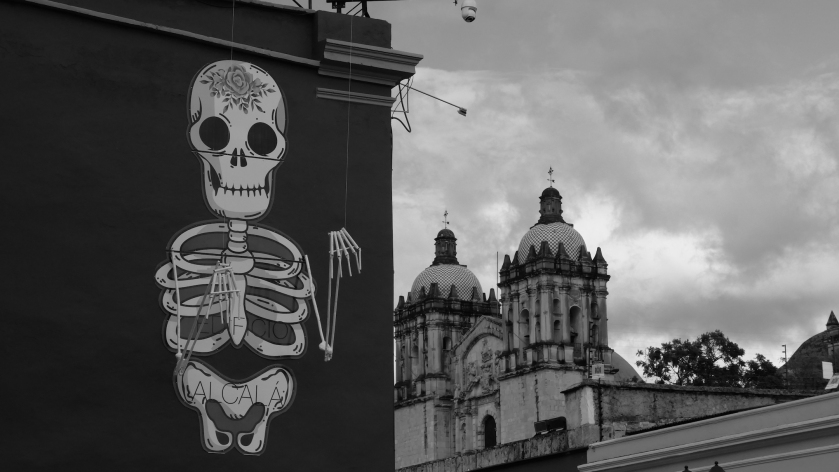 8 thoughts on “Oaxaca in black and white”